Carports at the side of a dwelling and fire rating requirements

There is a lot of confusion when I talk to people about when you can place a carport at the side of a dwelling, and how the fire separation from the boundary works.

As a general rule, the National Construction Code handles all this, and if your building is setback greater than 900mm from the side boundary then you don’t require fire rated walls, but if you are closer than 900mm then you do.

Carports though have an exception in the National Construction Code. It is a little bit convoluted on how this is calculated though.

The actual definition of this is outlined below, taken straight from the NCC:

I have added “Figure 3.7.2.7 Identifying an open carport” and “Figure 3.7.2.8 Requirements for non-combustible infill panels to carports” below (sources National Construction Code).

I’ll unpack some of the points above for clarification.

A carport can be built right to the boundary and not require to be fire rated (can be made of timber), if two sides and one third of the perimeter are “open”. Now, according to the NCC, even though the side located on the boundary is open (only has timber posts), it is considered “closed” if the roof sheeting is closer than 500mm to the side boundary.

The side attached to the house is considered “closed”.

If you add a roller door or infill a wall, this side is then considered “closed” as well.

So if you put this together, if you have 3m of room between your dwelling and the side boundary where the carport will be located, then as long as the front and back of the carport are “open” (don’t have roller doors, gates or part walls infilled), then the carport and it’s roof covering can be placed right on the boundary as long as the carport doesn’t exceed 6m in length.

This is explained in the NCC “Figure 3.7.2.7 Identifying an open carport” below.

There is a way around this though if you would like to have the carport extend longer than 6m. In this instance you would either step the carport in 500mm from the side boundary, or you can step the roof sheeting in, and still have the posts and rafters right on the boundary. An example of this is shown in the figure “Roof sheeting stepped in 500mm” below.

Simply put, the carport can’t have a room over or anything like that. The dwelling it is attached too would need to be able to stand independently if the carport was taken away.

The above generally refers to a skillion roof carport. If the carport has the main roof of the dwelling extend out over the carport, then the same conditions apply as above, but extra fire rating is required where the carport roof attaches to the existing dwelling.

This is shown below in figure “Figure 3.7.2.8 Requirements for non-combustible infill panels to carports”.

Hope this gives some clarifications on when and where carports can be built to the boundary without being fire rated.

If you have any questions regarding this, please don’t hesitate to contact us. 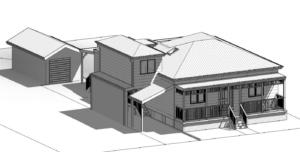 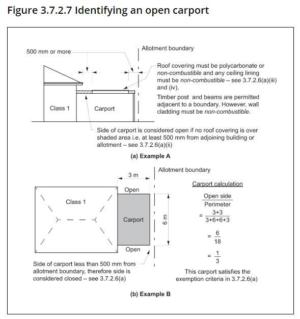 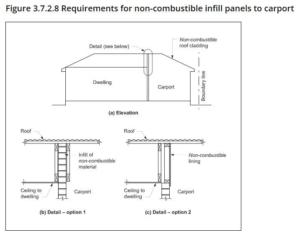 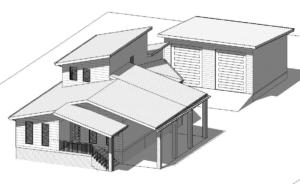