So another educational one today.

I get a lot of questions regarding a design and how far from the front boundary you can construct. While it used to be the case in the past that the front setback was “fixed” (usually at 5m) in all cases, it is now usually different depending on whether there is development already present within 40m on either side, or if there is not.

It varies between Council’s, but the front setback of “greenfield” sites can also vary depending on the type of road (local, collector or arterial road).

Different Council’s also usually allow “articulation” within the front setback, such as porticos, decks, verandahs, bay windows and other features, and some Council’s allow structures like carports to be built closer to the front boundary. So all in all it can be a bit confusing.

I am going to use Lake Macquarie Council’s Development Control Plan to outline some of these points, as they have guidelines on all the above points that can be explained. Most of these guidelines can be applied to other Council’s either whole or in part.

Some of the key points are outlined below:

Greenfield/Vacant sites - LMCC’s setback for vacant sites is a minimum of 4m. It doesn’t vary depending on the road type like some other Council’s do (see Figure 3 in "LMCC’s Guide to Front Setbacks" below). Other Council’s will have different setback if the road is a local road or an arterial road, or even what zoning it is in.

If the adjacent dwellings setbacks are greater than 3m difference, say one at 10m and one at 6m, then your development needs to be setback in line with one or the other (so either 6m or 10m). It is likely that one of them is very different from the predominant setback in the street, and Council would rather see your development setback in line with the average (see figure "Setbacks for existing areas with >3m difference" below).

A last note on this, generally Council will look at the immediate streetscape, so dwellings that are located further up the road, or on adjacent streets, are not considered. They consider sites within 40m, so as a general rule, two blocks either side of the subject property.

Articulation - Lake Macquarie, and a lot of other Council’s, allow encroachments into this front setback. These can include porticos, porches, balconies, decks, verandahs, bay windows, eaves and awnings.

Carports – Some Council’s allow carport to be built to the front boundary, or further forward than the existing building line. With Lake Macquarie, this will be considered where:

See figure "Carport can be constructed in the front setback" below.

This part of most Council’s Development Control Plans can be difficult to get correct. Hopefully the above will help clear the water if you are looking at development that has a front setback requirement.

If you have any questions regarding this, please don't hesitate to contact us. 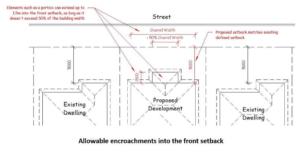 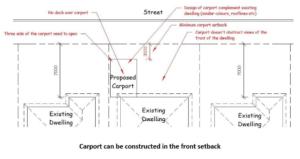 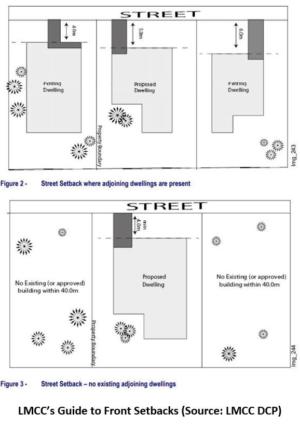