So today I thought I would go through another job that has recently been finished and sent to Council for a Development Application.

There were a fair number of design constraints and issues on the property including:

This was coupled with the client design requirements who were after a rather large increase in the floor area of the existing dwelling.

Below is an overview of the points above and the ways that we went about resolving the issues for a Council submission and also to suit the client’s needs.

In the end there was no way around having the dwelling long and narrow to suit the width of the block. The front setback remained the same, with the existing ground floor frontage remaining at the same setback from the front boundary.

Additions to the lower floor for a deck opening off the living spaces were contained within the existing width of the dwelling and located at the rear around the existing rear walls, and previous additions for bath, laundry and storage areas.

The first floor had bedroom and bath areas arrayed along one side and the living space on the other, with the main bedroom suite across the rear.

See figure below “Rear View” which shows the additions from the rear and the width of the first floor and additions of the deck on the rear.

Existing dwelling built to close to the boundary

As with a lot of older dwellings in the Newcastle area, the existing dwelling is already located closer than the required 900mm setback to the North-Western boundary.

As it is an older dwelling, the existing wall is not fire rated and contains windows. While Council won’t make you upgrade this wall if it is existing, if we modify the roof over, the wall, and of the rooms on the inside of the wall or the windows, Council will make us upgrade.

As the client did not want to have to fire rate this wall, part of the design included keeping the existing roofline, walls and windows along this side.

This was completed using a step in for the top floor, so that this side of the house could remain untouched.

See figure below “Existing Side View”.

As it is a higher density area, the FSR allowance for the site is 0.9:1. With the additions, we kept the ratio under this, coming in at 0.77:1, while still satisfying the client’s needs for space.

The FSR of 0.9:1 is calculated by working out 90% of the site area, in this instance 216.9m2, and then making sure that our floor area didn’t exceed this.

The areas included in the FSR calculation are just the living areas, and do not include storage areas, parking areas, deck opr porch areas, and the stairs are only counted once.

The total we arrived at was 186.2m2, making the dwelling a decent size while still complying.

With the proposal being located in Newcastle Council, there are certain height envelopes that need to be adhered too. In a nutshell, the higher that you go up, the further from the side boundaries you need to be.

This has resulted in setbacks on the North-Western side of 1330mm at the front, and 1184mm at the rear.

As such, the proposal complies with the height envelopes for the site.

These can be seen in the figure below “Existing Side View”.

Side setback distance not suitable for a side carport

The existing dwellings access at the side for car parking was originally only 2.3m, which wasn’t large enough to fit a car.

The proposal will demolish part of the side of the existing dwelling, having this setback distance increased to 2700, and constructing a carport along this side. The carport has exemptions to requirements to be fire rated (see previous blog post on carport exemptions for more details).

This setback and the proposed carport can be seen in the attached picture “Front View” below.

Being a first-floor addition, the proposal would generate possible overshadowing and privacy issues for neighbours if it was not addressed.

The living area was designed with no windows facing the side, as this would be the main area Council would be concerned about privacy.

The bedroom and bathroom areas are usually exempt from requirements for privacy in the Council DCP.

The increased setback on the South-Eastern side helps reduce any overshadowing of the neighbour to the South-East, with the majority of the shadow cast into the front setback area.

The dwellings to the North-East and North-West are unaffected by the shadows of the proposed additions.

We were able to show conclusively that the proposed shadows from the proposal did not reduce the neighbour’s sunlight access to less than 3 hours on June 21st, complying with Council’s requirements.

We were able to fit in the client’s design requirements within the area allowed with this rear setback.

In the end all these issues were addressed and approved by Newcastle Council without the need to change any of the design.

The end design was within the guidelines of the client and they were very happy with the outcome. 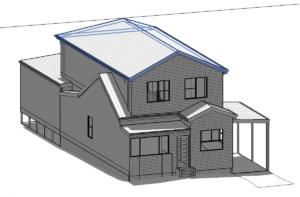 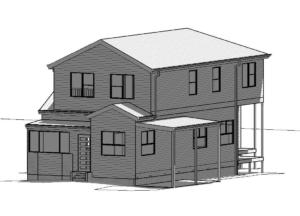